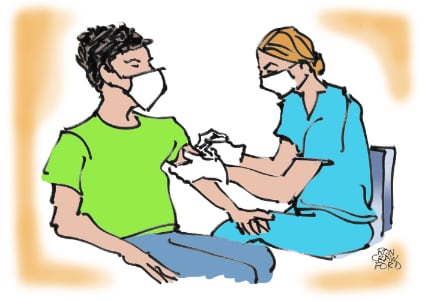 What Democrats are doing for you right now—a list of bills passed in November and December 2021 and January 2022. In addition, bills that are currently being negotiated:

China Competitiveness—currently being negotiated with the Senate version

The Senate passed the U.S. Innovation and Competition Act last year, which includes $52 billion to increase U.S. semiconductor production and authorizes $190 billion to strengthen U.S. technology and research to compete with China.

U.S. House of Representatives leaders on Tuesday unveiled a bill aimed at increasing U.S. competitiveness with China and supporting the U.S. chip industry, including $52 billion to subsidize semiconductor manufacturing and research.

President Joe Biden’s administration is pushing to persuade Congress to approve funding to help boost chip production in the United States, as shortages of the key components used in autos and computers have exacerbated supply chain bottlenecks.

The House bill has key differences with the Senate version. It does not contain the $190 billion for technology and research but does include $45 billion to support supply chain resilience and manufacturing of critical goods, industrial equipment and manufacturing technology.

Funding could be used to “relocate a manufacturing facility out of countries of concern, including countries that pose a significant economic or national security threat to the United States,” the House said.

The government could use funds to establish stockpiles to provide “reserves necessary to maintain the availability of critical goods during supply chain shocks.”.

President Joe Biden said the House and Senate proposals represented the “transformational investments in our industrial base and research and development” that helped power U.S. global economic leadership in the 20th century.

The House bill also includes a number of trade provisions and would impose additional sanctions on China for its treatment of Uyghurs and offer refugee status for qualifying Hong Kongers.

The bill also reauthorizes and revises Trade Adjustment Assistance programs, which help workers whose jobs or pay is hurt by imports, and reforms the Generalized System of Preferences, a preferential tariff system for imports.

Build Back Better –two parts have passed and the last is being negotiated. All three have passed in the US House 11-9-21—Republicans in the Senate are refusing to pass the final piece.

The Build Back Better Plan or Build Back Better agenda is a legislative framework proposed by U.S. President Joe Biden ahead of his inauguration. It includes funding for COVID-19 relief, social services, welfare, and infrastructure, in addition to funds allocated towards reducing the effects of climate change. The funding for COVID-19 relief has already passed. The infrastructure portion has also passed. The third part is a plan for the American family which includes child care support, free pre-school, family leave, support for elders to keep them in their homes, continued Child Tax Credit that ended in December of 2021 and lifted 50% of poor children out of poverty and much more.

Freedom to Vote Act—introduced in Senate first, all Democrats are willing to passe it—Republicans refuse to vote for this and thus this also stops the US House to vote on it

Next, the bill establishes Election Day as a federal holiday.

The bill declares that the right of a U.S. citizen to vote in any election for federal office shall not be denied or abridged because that individual has been convicted of a criminal offense unless, at the time of the election, such individual is serving a felony sentence.

Additionally, the bill sets forth provisions related to election security, including by requiring states to conduct post-election audits for federal elections.

Override a number of election rules put in place by some Republican-led states. It would allow same-day voter registration and no-excuse mail voting, prevent states from requiring a photo ID to vote, allow felons to vote in all states and would require super PACs and so-called “dark money groups” to disclose all donors who contribute more than $10,000.

This bill expands eligibility for Post-9/11 GI Bill educational assistance. Specifically, the bill adjusts the type of service that entitles a member of the Armed Forces, reserves, or National Guard to such assistance. Under the bill, service by a reservist or National Guard member that is entitled to pay counts toward benefit eligibility. Such service includes training, active military service, inactive training, and general duty for which basic pay is warranted.

This bill directs the Transportation Security Administration (TSA) to ensure that any individual traveling on a flight that departs from or arrives to an airport inside the United States or a U.S. territory is fully vaccinated against COVID-19. The TSA must also ensure that there is an exception to the requirement for an individual who is ineligible or medically unable to be fully vaccinated against COVID-19.

This bill establishes within the Department of State the Office to Monitor and Combat Islamophobia and addresses related issues.

The office shall monitor and combat acts of Islamophobia and Islamophobic incitement in foreign countries. The bill establishes the position of Special Envoy for Monitoring and Combating Islamophobia, who shall head the office.

The Forced Labor Enforcement Task Force shall report to Congress a strategy for preventing the importation of goods produced in China using forced labor. The strategy must contain certain information, including a list of entities (1) producing goods in Xinjiang using forced labor; or (2) working with the government in Xinjiang to move forced labor or Uyghurs, Kazakhs, Kyrgyz, or members of other persecuted groups out of Xinjiang.

The U.S. Customs and Border Protection shall generally presume that goods produced by these entities and certain other entities, including those sourcing material from Xinjiang or involved with Chinese government forced labor programs, are barred from importation into the United States. An importer may rebut this presumption by establishing, with clear and convincing evidence, that the good in question was not produced wholly or in part using forced labor.

This bill directs the Department of Health and Human Services (HHS) to take actions to improve data sharing and other aspects of immunization information systems. These are confidential, population-based databases that maintain a record of vaccine administrations.

As a condition of receiving the grants, recipients must use the designated standards. However, HHS may waive this condition in some circumstances.

Protecting Our Democracy Act—passed US House 12/09/21

This bill addresses issues involving (1) abuses of presidential power; (2) checks and balances, accountability, and transparency; and (3) election integrity and security.

Specifically, regarding abuses of presidential power, the bill

To address checks and balances, accountability, and transparency, the bill

To address election integrity and security, the bill

This bill prohibits governmental restrictions on the provision of, and access to, abortion services.

Specifically, governments may not limit a provider’s ability to

Furthermore, governments may not require a provider to

In addition, governments may not (1) require patients to make medically unnecessary in-person visits before receiving abortion services or disclose their reasons for obtaining such services, or (2) prohibit abortion services before fetal viability or after fetal viability when a provider determines the pregnancy risks the patient’s life or health.

The bill also prohibits other governmental measures that are similar to the bill’s specified restrictions or that otherwise single out and impede access to abortion services, unless a government demonstrates that the measure significantly advances the safety of abortion services or health of patients and cannot be achieved through less restrictive means.

The Department of Justice, individuals, or providers may bring a lawsuit to enforce this bill, and states are not immune from suits for violations.

The bill applies to restrictions imposed both prior and subsequent to the bill’s enactment.